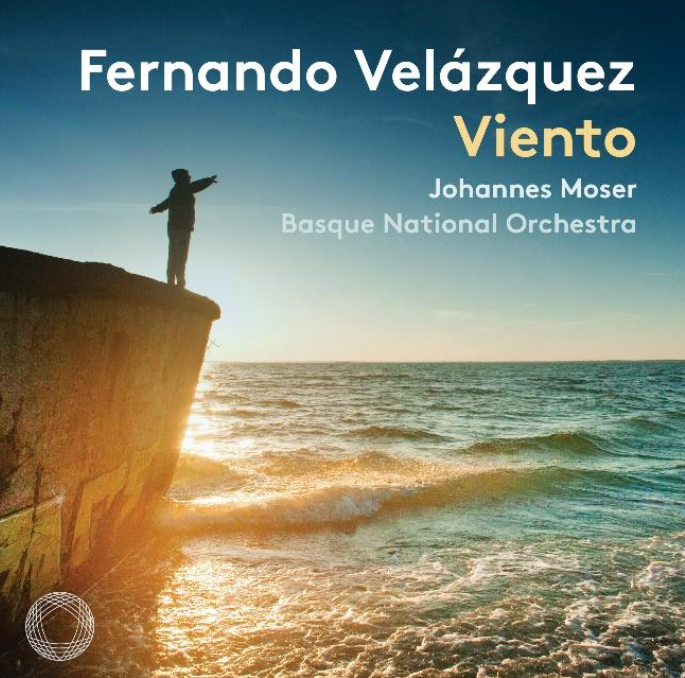 Fernando Velázquez displays another facet of his work as a symphonic composer in ‘Viento’ (Wind).

EIn a recording project released by the legendary Pentatone label, Fernando Velázquez displays another facet of his work as a symphonic composer in ‘Viento’ (Wind).

Madrid, June 2022. Symphonic poetry, cantata, cello concerto… these are the genres that the composer Fernando Velázquez tackles in his recently released recording project, ‘Viento’ (Wind). Released on the Pentatone label, and under the musical direction of the Basque composer, the recording brings together the prestigious German-Canadian cellist Johannes Moser, the Euskadiko Orkestra and the Kup Taldea choir. This is the first time that Fernando Velázquez has presented an original recording that is not linked to a film or theatre production. ‘Viento’ can be listened to on the main streaming platforms and purchased on the Pentatone website. .

Viento marks the Getxo-born musician’s first collaboration with Johannes Moser, guest soloist on the recording of the Concierto para violonchelo (Cello Concerto). However, Fernando Velázquez had previously worked with the Euskadiko Orkestra. In fact, they had already enjoyed great success together for the soundtracks for films such as Un monstruo viene a verme (A Monster Calls) – for which Fernando Velázquez won the Goya for Best Original Score in 2017 -, Ocho apellidos vascos (Spanish Affair), Contratiempo (The Invisible Guest), Submergence and major series such as Patria. The composer also has close ties with the Guipuzcoan choir Kup Taldea, with whom he recorded the music for the aforementioned Patria and J.A. Bayona’s film El orfanato (The Orphanage).

“Although I don’t think there is an essential difference between other compositions and those being released on this occasion, it is the first time that I have presented to the public a piece that does not belong to a film or play”, explained Fernando Velázquez. “The fact that it is with Euskadiko Orkestra, Johannes Moser and Kup Taldea is very exciting because of the admiration I have for them and their involvement in the recording. It is also very exciting to be able to do it with Pentatone, one of the world’s leading record labels”.

‘Viento’, the force of nature

As the text published by Pentatone regarding ‘Viento’ explains: “The album opens with Concierto para violonchelo, which combines an elegiac opening movement, like a transcription of a Stabat Mater, with a rock-inspired central movement and a finale that employs the rhythm of the Basque dance Zortziko. Johannes Moser’s masterly interpretation brings out all the colours and nuances of this exceptional score. Cantata d’Estío was conceived to be performed in concert before Beethoven’s Ninth, and therefore shares tonality and organicism. Combining a biblical text from Ecclesiastes with poetry by Fernando Velázquez’s father, José María, the cantata celebrates the beauty and fullness of nature and the burst of summer life. Viento del Oeste (Wind from the East) conveys a similar feeling, communicating those ineffable sensations that a perfect sunset with clear skies can give us. Ultimately, ‘Viento’ is not only a celebration of sublime nature, but above all an act of liberation, for which the composer has written the music he finds most beautiful and meaningful”.

In addition to being a leading name in the field of music composition for film, theatre and television series, Fernando Velázquez is a multifaceted musician: orchestra conductor, concerto composer, cellist, arranger and songwriter.

He has composed award-winning and memorable soundtracks for films including all those by J.A. Bayona, such as El orfanato (The Orphanage), The Impossible and Un monstruo viene a verme (A Monster Calls), the latter of which was awarded the Goya for Best Original Score in 2017.

He also composed the music for some of the highest-grossing films in Spanish cinema’s history, such as Ocho apellidos vascos (Spanish Affair), Los ojos de Julia (Julia’s Eyes), El silencio de la ciudad blanca (The Silence of the White City), Contratiempo (The Invisible Guest) and series such as Patria, El inocente (The Innocent) and the upcoming Alma, among others.

His Hollywood experience includes films such as Guillermo del Toro’s The Scarlet Summit and M. Night Shyamalan’s The Evil Trap. He was asked by Wim Wenders to score his 2017 film Submergence.

He has also enjoyed a significant and award-winning career as a classical musician and composer. Among his more than 250 symphonic compositions, the record release of ‘Viento’ is a particular highlight.

It is also worth mentioning Humanity at Music, a cantata translated into several languages which has become the international anthem of cooperativism. It is part of an inter-cooperative artistic project bringing together artistic disciplines such as music, storytelling, singing, illustration, theatre and dance. Also of note is Concierto para trombón y orquesta (Concerto for Trombone and Orchestra), recorded by Ximo Vicedo and Euskadiko Orkestra in 2020.

As a conductor, he has led London’s Philharmonia, the London Metropolitan, the Czech National Orchestra, the Budapest Radio Orchestra, and the symphony orchestras of RTVE, Bilbao, Euskadi, Extremadura, Galicia, Comunidad de Madrid, Navarra, Murcia, Principado de Asturias and Seville, among others.

As an arranger, he has worked on orchestral arrangements of pieces by other composers, such as a version of the famous Cántico espiritual by Amancio Prada, based on the poems of San Juan de la Cruz, or his collaboration on Jorge Drexler’s latest album, Tinta y tiempo, among many others.